The plot of the game is losely based on the novel "The Old Man and the Sea", written by E. Hemmingway in 1951. You are an old man that aims to catch a marlin, but there is only one remaining bait.

This game has been presented to the GMTK jam 2019! The topic of the jam is "Only one". We fulfill the topic in the following aspects:

- The game is controlled with only one key, to make the bait go a bit up.

- There is only one bait. If you fail, you have to start from the beginning.

- There is only one marlin that you must catch in order to win.

Note that the game is fully playable on mobile -there several graphical issues due to the resolution, but it should be possible to play just by tapping the screen.

Troubleshooting: the game should run on any browser, but looks like Chrome has some difficulties. The music can be buggy sometimes... The native (WIn/Linux) versions should be free of errors.

If you receive an abort(114) ASSERT error, try changing the configuration of the cookies in your browser. In Firefox, going to about:preferences#privacy and unlocking cookies solves the problem.

We had the help of two nice friends. Elena made all the wonderful art you see here, and JJRamos helped with the coding!

The code of the game is free and hosted in GitHub, powered by Godot Engine! :D

The code of the game is licensed under GPLv3.

Extract both files (executable and pck) in the same folder.

Will the music be available for download? It's so pretty

Hi! The music is uploaded here in SoundCloud if you want to listen (and download) it: https://soundcloud.com/victorseven

If you want to use them for your proyects, look for the loop-ready samples in the GitHub proyect. The license is Creative Commons, so you can use them in non-commercial proyects.

Thank you very much!

I went past the marlin and just kept going deeper and deeper thinking there was going to be something bigger but after about 5 minutes of dodging angler fish I gave up and just caught one. There should be a reward for going deeper (maybe there is and i just didnt go far enough) or a sea floor to let the player know that theres nothing else down there. The artwork is fantastic and I love the fish with legs :)

Nice relaxing game. Think about adding a portrait (icon) of what fish you are looking for.

This game is good, and relaxing. I liked the first song, it could have stayed just as that one the whole time.

The art is really good, it's what got me drawn towards this game! But is there an end to this game or is it endless? Been in that black background place for a long time and pretty sure I played the game for 10 mins, not really sure what the target length for completion is.

Hi Mark! Thank you for your feedback!

The objective of the game is to catch the marlin, the big, brilliant fish. The music will change just before it appears. If you miss, then you fall into the abyss, where there are not any chances of picking it again.

We should clarify that better -you are not the first player to point that out. We'll do it after the jam voting ends :D Again thank you for writing! 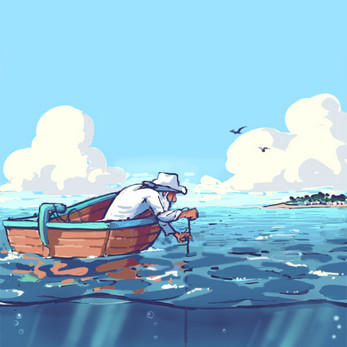